Jodhpur Tourism : Best Places To Visit in Jodhpur (The City Of Blues)

Jodhpur Tourism : Best Places To Visit in Jodhpur (The City Of Blues) 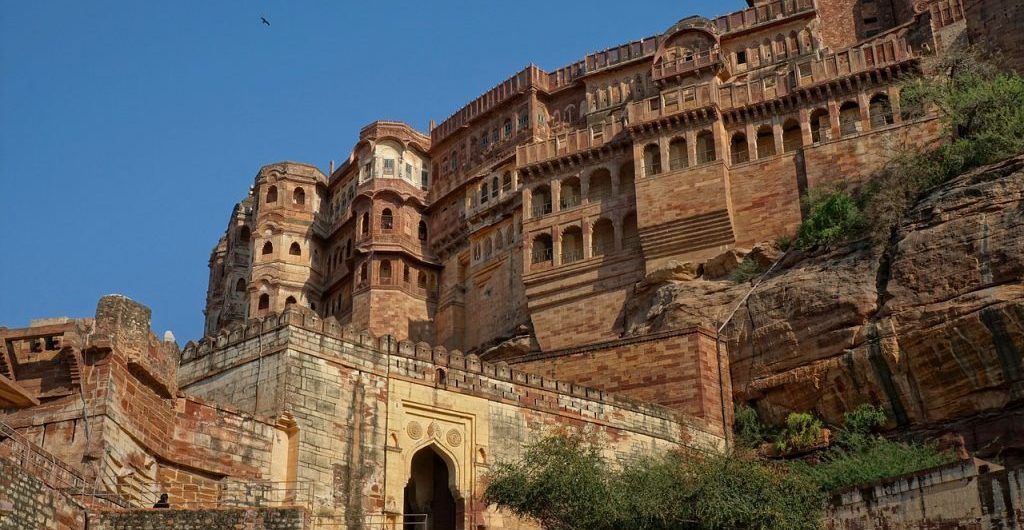 Let us explore the land of the Handlebar soup-strainers with Jodhpur Tourism. Famous as the culinary capital of Rajasthan, the blue city is home to the world’s most influential handicraft industry.

Jodhpur was founded by Maharaja Rao Jodha. Jodhpur was once a princely state named Marwar. Now the medieval timed state has evolved into the most crucial for Rajasthan’s economy.

Let us take you on a literary tour of the Blue City, and find the best places to visit in Jodhpur!!

The Blue and Sun City of India: Jodhpur Tourism

Jodhpur is known as the Blue City and the Sun City of India.  All the houses in the older region of the city are painted blue, hence the name -Blue City. The scientific reason is as follows.

Tropic of Cancer passes through the town, so the weather is sunny and hot throughout the year. Thus, the Blue color keeps the house’s temperature low.

But the entire city is not painted in blue, and only the houses close to the massive Mehrangarh Fort have a blue color.

Jodhpur is also famous as the Sun city in Rajasthan, as the sun shines brightly and the weather stays warm and pleasant throughout the year.

The beautiful art of Jodhpur represents centuries of cultural evolution and history. Many objects and artworks of Jodhpur provide insight into the cultural and other aspects of the Rathore rulers of Jodhpur.

The precious exhibits of the time have been curated by taking the help of the royal family, and are displayed in exhibitions.

The art of Jodhpur also reflects on the developments through time. These include the building of the Great Wall of China, Columbus America’s voyage, and the Italian Renaissance among others.

Jodhpur tourism has always been a very flourishing region and still has immense artistic prosperity and wealth.

The art forms were also used to create precious objects by the royals, and the gifts helped the rulers of Jodhpur indulge in strategic partnerships.

The court paintings developed in Jodhpur around the 17th century and the real cause of this rapid development was an association between the Mughal and the Jodhpur rulers.

The local bold and folk-style colors were combined with Mughal naturalism, and a new Rajasthani style of art was formed.

The iconic Palanquins (Dolki) remained the travel medium for the royal ladies up to the 20th century. The use of gold, diamond, silver, and other precious metals was abundant in Jodhpur of the medieval era.

The high art of Jodhpur was always open to new ideas that came to it via different cultures.

Events of the Jodhpur Fort:

It started back in the year 2007. The mystical and native musical tones of Jodhpur and Rajasthan reverberate and combine with the exclusive musical notes rendered by the musicians from across the globe.

UNESCO endorses the popular event, and RIFF is attended by more than 250 musicians of fame and recognition in Rajasthan.

The religious musical festival is attended by notable artists from different parts of the globe. A fascinating blend of dance and poetry across genres including International, Sufi, Folk, and Indian classical music can be observed.

It presents the rich amalgamation of different cultures including Afghan, Arab, Indian, Mughal, and Persian culture and civilization. The exclusive event is strictly held within the Mehrangarh.

Fairs and Festivals of Jodhpur

Several small and big celebrations take place in the city, and the most important ones are listed below.

One of the famous festivals of the city – the Gangaur festival. Gana means Shiv and Gaur translates to Gauri, Goddess Parvati. This festival is the procession of the Hindu deity Gangaur Mata.

Spread across March and April, the festival is for the god Gauri (wife of Lord Shiva) and celebrates the harvest, spring, and marital fidelity.

Womenfolk of Jodhpur celebrate the festival to get the “marital bliss” from the goddess Gauri.

This is celebrated in memory of the brave heroes of Rajasthan. It was formerly called the Maand Festival. The festival takes place in September and/or October / Hindu calendar month of Ashwin.

It is an auspicious event that is celebrated on the “full moon” night of Sharad Purnima. The music of the festival reflects on the extravagant lifestyle and the gallantry of the rulers of Rajasthan.

Dance and music of Jodhpur and Marwar are the main themes of this 2-day long festival. The Mehrangarh Fort and Umaid Bhawan Palace are the venues of the festival.

Few of the most famous attractions of it are the Polo and the Camel tattoo show.

This festival was initiated only a few years ago. The best and professional kite flyers from all over the world participate in this festival.

The festival takes place on Makar Sankranti, 14th of January each year. The festival lasts for 3 days. Indian Air Force helicopters also participate in the event and release kites from the sky.

Jodhpur was once an important center of trade and the people here have always been open-minded and hospitable. They welcome everyone with a sweet smile.

The Marwari ascent can be easily identified. The unique culture of Jodhpur is also reflected in the multi-hued costumes of locals.

The smart and tight trousers worn by horse riders that are called “Jodhpurs” have taken the name from this city only. The folk music, folk dances, and exquisite handicraft reflect the affectionate aura of the city.

The bazaars of the city may offer you varied silver jewelry, miniature elephants and camels, the clay figurines, Rajasthani textiles, the embroidered and expensive leather shoes, lacquerware, and other memorable and exclusive items.

The best time to visit Jodhpur is from October to February as the rest of the year the town’s temperatures stay as high as 45° Celcius.

Jodhpur is also the birthplace of some of the most popular recipes and cuisines of India. These include :

The city has some of the best sweets on offer as well, and these include:

Many of these recipes are cooked only through the traditional cooking methods in Jodhpur. Favorite among the locals is the Laal Bhatti Wala’s Ghee ki Kachori (deep fried in Desi ghee), and the mirchibadas of Surya Namkeen. Kair-Sangri ki Sabzi, Ghee ka Churma, Bajre ki Roti with Kadhi are also very popular.

Best Places to Visit in Jodhpur:

Apart from Bollywood, the timeless and beautiful Jodhpur palaces have also been featured in Hollywood movies.

The best places to visit in Jodhpur are Machia Biological Park, Rao Jodha Rock Garden, and Kaylana lake. When you think of the time, it will not be a critical affair for you. Days required to visit Jodhpur are as minimal as 4 days.