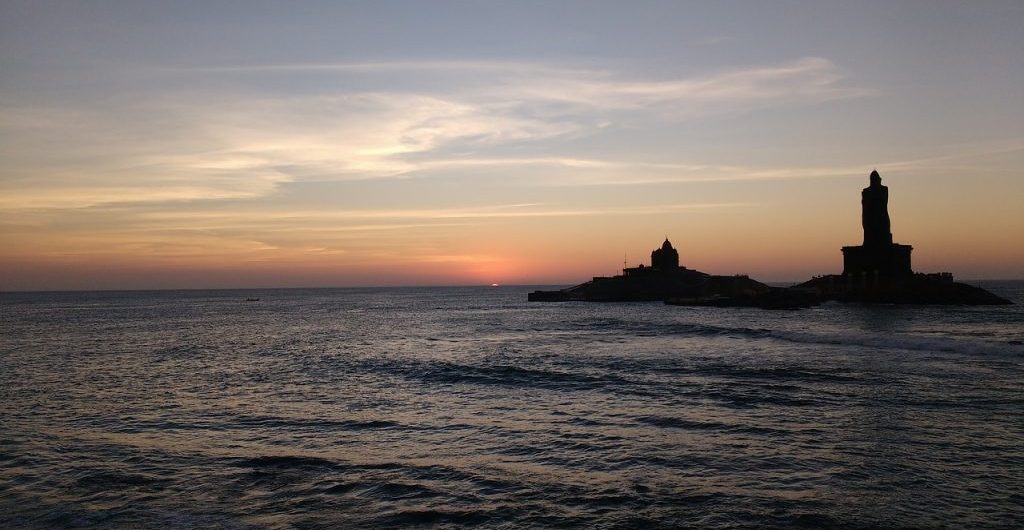 Have you heard the phrase – “living at the edge”? Well, the people of Kanyakumari proves this phrase right. It’s the last edge of the Indian Mainland, making itself an exciting place to venture.

It is one of the most crucial cities of Tamil Nadu. It’s cultural versatility, and scenic beauty comprises of a lot many places to be seen in one’s lifetime.

The creative touch of God is present in every single tip of grass out here. The city has more than 4000 years of cultural heritage. The state’s tradition thrives for music, dance, folk arts, and fine arts as well.

The province is renowned for local cuisine. Kanyakumari tourism is one of the most influential tourism in India. It had an annual growth of sixteen percent in 2015.

Foreign arrivals numbered 4.68 million, which counts as the highest in the country. Out of many tourist places, Kanyakumari tourism stands out as a must one to visit and enjoy for everyone.

The city’s famous for spectacular sunrises and sunsets. The worship of deity Kanyakumari here dates back to the prehistoric period of Kumari kandam.

In fact, Kanyakumari beach is always a busy tourist spot all around the year. The cool breeze in the evenings and the waves are never-ending for the visitors. Still, during April and May, the humidity rises to about 35° Celsius.

Best time to visit Kanyakumari is in March. The temperature in March is soothing and will be suitable for visiting Kanyakumari, India points of interest.

The monsoon months starting from June to September gets showers at Kanyakumari. The downpour during July and August cools the surface of Kanyakumari.

The visit in these months provides the tourists with deep green experience both natural beauty and landscape of Kanyakumari.

The months from October until February is said to be the ideal time to traverse through the banks of Kanyakumari.

Because the weather remains calm and cozy and the people can engage in some adventurous water sports, beach activities, etc.

December to February is the real peak season as far as Kanyakumari tourism is concerned. The tourism sector gains maximum revenue during these months.

As the place Kanyakumari is a real tourist hub, the area is also replete with much hotels and restaurants. But if you are interested in enjoying a homely?

Yes, there are enough home stay facilities too, in and around Kanyakumari. As the winter heralds, in November, Kanyakumari will be busy with various festivals like cape Comorin, Navaratri, Chaitra Purnima, etc.

Celebrations are meant to add color and happiness to the usual routine of people. The cape Comorin festival is the most celebrated festival in Kanyakumari.

It lasts for three days in October and is celebrated with high enthusiasm and great festive spirit. The festival is jointly celebrated by the local men and the tourist folks.

Kanyakumari also is known as Cape Comorin is the southernmost tip of the country and is famous for its scenic beauty. The festival celebrates the confluence of the bay of Bengal, the Indian Ocean, and the Arabian sea.

A holy dip in the sea of Triveni Sangam is considered fortunate and auspicious. A lot of cultural programs takes place on occasion. The dancers and musicians outshine showcasing their excellence.

Tourists get attracted to this place, as it is the only place where one can enjoy the sunset and moonrise at the same time on a full moon day.

The Vivekananda’s rock memorial known for the space for mental emancipation further elevated the inner strength of peace seekers.

The region is also famous for its local cuisine. The banana chips made out of ripe banana is a favorite snack of these people. Minced parts is another lovable dish of Kanyakumari.

An exceptional pancake made with fermented rice batter and coconut milk is a must try an item of Kanyakumari.

The people of Kanyakumari make a unique fruit juice to beat the humidity of summer season. It is a beautiful blend of Banana, apple, pineapple, grapes, and pomegranate.

These fruits are well mixed with, and it is one of the best drinks that Kanyakumari can offer to a good lover. Kanyakumari is regarded as the second most urbanized district in the southern state of Tamil Nadu.

The community is a flourishing city in terms of its contribution to the state economic system. The agriculture business is the most significant occupation of the population of Kanyakumari.

How to Reach Kanyakumari:

Taxi or cab can be arranged from the airport, and the cost will be around a thousand rupees to a thousand six hundred rupees to reach Kanyakumari, and it’s surrounding places.

All major cities are connected with Kanyakumari by train. Most of the first train services have a stop at Kanyakumari junction.

The traveler can always book the state buses as well as private buses from major cities like Chennai, Bangalore, Trivandrum, and Coimbatore. And the bus fare will be based on the kind of coach the traveler chooses.

Kanyakumari tourism is India’s one of the most trodden pilgrim center and a beach resort, which is again noted for its unique characteristic feature of beautiful sunrise and sunset.

It is India’s lands end, the tip of peninsular India, where the merging not bay of Bengal, Indian Ocean, and Arabian sea can be witnessed.

Apart from the generous sea, the beach offers a lot of adventurous activities to visitors like trekking, swimming, motor-biking, and surfing.

This beach has a specialty of having different hues of sands on its banks. One can enjoy the breathtaking view of sunset once you climb the lighthouse of Kanyakumari beach.

The district, Kanyakumari is a must visit place among the tourist hubs of India. The area stands out with its unique features of Kanyakumari sightseeing and culture.

The travel addicts and tourists will mark the name Kanyakumari as one of their favorite hangout destinations in their memory.

Previous postJodhpur Tourism : Places To Visit in Jodhpur (The City Of Blues)
Next postKheerganga Trek – Know About The Most Liked Trek In The Himalayas