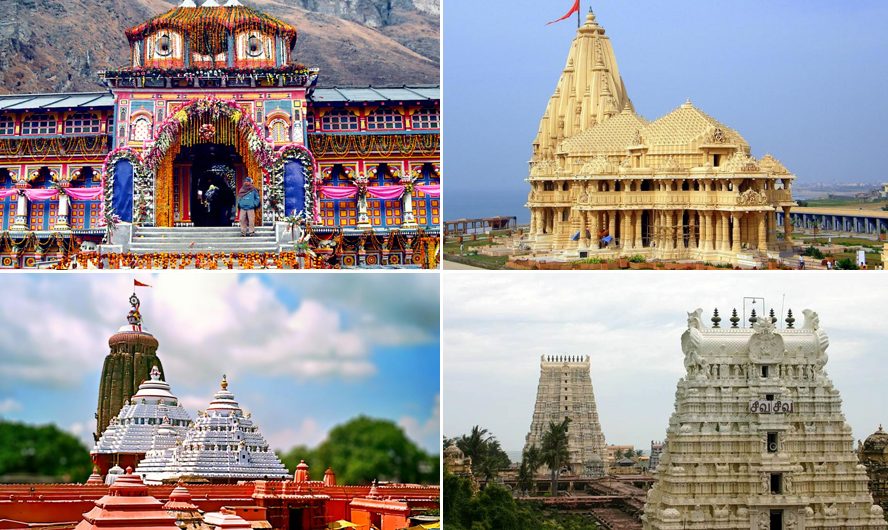 India being a religious country is full of historical mythology. There are a number of religious places that are a must visit.

Among these places, the Char Dham namely – Badrinath in Uttarakhand, Jagannath Puri in Odisha, Dwarkadheesh temple in Gujarat and Rameshwaram In Tamil Nadu are considered the gems and show the way to attain moksha.

For devotees and priest, the saying that Chardham yatra once in a lifetime is mandatory to get rid of sins hold true.

A number of stories and historical facts have been written about these shrines in Vedas, and Hindu books that talk about their immense importance.

Besides reading the scripture, one must definitely see the marvels that these shrines are and processions performed by priests are also a view to behold.

Though a lot of tourist travel the Char Dham throughout the year, still there are many who have not got a chance to experience the enormous architecture and valuable history.

Therefore, here is a brief introduction to the Chardham yatra and the religious history attached to them. Located in the foothills of the Himalayas in Chamoli district of Uttarakhand, Badrinath is one of the most pious worshipping places for Hindus.

It is one of the four Dham that is believed to be the place to attain moksha or salvation according to Hindu mythology.

Placed within the cusp of Nar and Narayan mountain ranges, this Badrinath temple sits serene and is an epitome of natural beauty.

Devotees with unwavering faith are drawn towards this religious temple to offer their prayers. It is situated about 3100 meters about the sea level and near the shores of River Alaknanda.

According to Hindu mythology, visiting the  Badrinath Dham is mandatory once in a lifetime to attain salvation from the cycle of life and death.

It is known that a Hindu God called Lord Vishu meditated under the Badri tree for over 1,000 years to prevail peace upon the human race.

The temple has a one-meter tall statue of Lord Vishu sitting in the self-meditating place known to be Swayam Vyakta Kshetra of Vishu.

Many Hindus are smitten by the architecture of the temple as it manifests a North Indian style of architecture. It is conical in shape and is believed to be built the earliest by Shankaracharya and was later resurrected a lot many times.

Inside the Badrinath Temple

The entrance of the temple has a large tall arched gate that guides to the sabha mandap. The sabha Mandap then leads the devotees to darshan mandap.

From here, one enters the final place Garbha Griha. The roof of the temple has a conical shape that extends 15 meters upwards and is colored gold.

Garbha Griha, the innermost section of the temple, stands a tall black stone statue of Badrinarayan or Vishnu that has a conch and a chakra in each of its arms.

The statue has four arms, and the other two arms are resting in the lap of Lord Vishu in a posture of meditations. Accompanying the deity is sage Narada.

Pooja and ritualist processions are a continuous thing at the temple. The temple open at 4:00 am in the morning which begins with a Maha Abhishek pooja.

In the evening, aarti is done marking the end of the day-long paths and poojas. Post this, the statues of Lord Vishnu is cleared of all decorations and is then covered in a sandalwood paste.

This paste is then distributed the next day in the form of parsad or blessing.

Due to its location and high altitude from the sea level, this sacred shrine of Hinduism is open half the year with devotees starting to pour in from the month of April and remains open till November (mostly after the celebration of Diwali).

During winters, the temple is though open but does not has provisions for huge footfall of tourists. Therefore, it is recommended to visit the Badrinath temple only at the onset of summers till the end of autumn. Dhwarkadheesh temple is located in Gujarat is another pious place of great importance for the Hindu Devotees. This is the second point of Chardham Yatra. One of the four Dhams has significance because it is another shrine that is said to provide salvation to mankind.

Dwarka itself has a deep meaning. While Dwar means door, Ka means Brahma, ie. the path to salvation. Built near the shore of Gomti, it is also called the Jagatgir or Trilok Sundar,

The temple is the pious place of Lord Krishna. After leaving Mathura, Lord Krishna stayed in Dwarka for a very long time.

According to legends, a small girl called Badana was a devotee of Krishna and so she regularly visited the temple to offer her prayings. One day, impressed by her devotion, the principal deity started walking with her.

The priests of the temple thought that she might have stolen the deity and were asked to return the same. The small girl Badana on the hand offered gold equal to the weight of the deity in return.

They all agreed out of greed and what happened next was a miracle. As Lord himself knew that Badana has nothing to give in return, her small nose pin became equal to the weight of the deity. That’s how the Lord helped his devotee.

Dwarka temple is built of limestone and is believed to be developed by Vajranabha who was the great-grandson of Lord Krishna.

This Bhavya temple or marvelous building stands tall at the shore of Gomti and is 80 meters tall that is almost equal to a 25 story building. The building supports a Chalukyan style of architecture.

It stands on 72 pillars all of which have been carved out of a single stone. The carving is detailed sculptural inscriptions signifying the rulers of a different dynasty.

Inside the Dwarka Temple

The main building or the Mandap is a five-story building that has the idol of Lord Krishna. The black idol is so enchanting that devotees actually feel that God is there with them in presence.

The Shekara that is even taller holds a flag at the top. The flag features a sun and a moon. This flag is changed five times a day though it holds similar symbols.

The Dwarka temple has an entrance from two Dwars. While the Dwar at the north is called Moksha Dwar, the one with a southern entrance is called the Swarg Dwar.

Though visitors throng the city of Dwarka and to the temple throughout the year but October to March are the recommended months to visit Dwarka as the temperature is generally low and it is easy to roam about the temple. Jagannath Puri temple is one of the main attractions of Puri. Not just as a tourist destination but this place has huge significance in Hinduism. This is the third point of Chardham Yatra.

Located in Bhubaneswar district of Odisha, the temple is of utmost relevance as it is one of the Char Dhams of Moksha. The huge number of travelers flock to the place not just for its magnificent but a lot of other enigmatic activities

Jagannath temple has a vast history about King IndraDyumna who in his pursuit to find the deity Nila Madhava did a lot of efforts.

He asked different Brahmanas to go find the deity which only Vidyapati was able to find. According to Hindu mythology, king Indradyumna constructed a temple for Lord Brahma and was asked to wait to call architects to carve out figures of deities.

As he was anxious about meeting the lord, he opened the doors of the temple before time and saw that the figures had incomplete limbs and fingers.

Feeling bad about his anxiousness, he decided to end his life by staying on grass and fast unto death. By seeing his zeal to meet the lord, lord Jagannath came to his dream that night freeing him of all his offense.

The Jagannath temple is characterised by Oriya architecture and is constructed in a curvilinear shape and has about 120 temples and shrine inside.

On the top of a temple are a flag and a chakra. The flag has this peculiarity of flowing in the opposite direction of wind-defying the scientific theories.

Inside the Jagannath Temple

This classical style temple has a shikara i.e. the tower above the inner sanctum where deity resides. Jagannath temple surrounded by walls with each side having a gopura or a gate over which a pyramid shape roof rises.

It is one of the largest temple in the region and has a mammoth kitchen inside as well. The outer enclosure of the temple is called Meghnada Prachira, while the inner enclosure is called Kurma Bedha

Thinking about visiting the shrine is July is a complete no. It is not the recommended time. As it is too humid and hot during June and July, it is often recommended to visit Jagannath Puri during October till the end of February. Of the four Dhams, Rameshwaram is another Hindu temple that is located in Tamil India. The temple is dedicated to Lord Shiva and is one of the twelve jyotirlingas in India.

It resides in the Rameshwaram district of Tamil Nadu. The temple is the oldest and dates back to Treta yug when Lord Rama is said to be born. This is the fourth and last point of Chardham yatra.

According to Hindu Mythology, Rameshwaram means abode of Shiva who was worshipped by Rama of Valmiki’s Ramayana.

Lord Rama installed the linga inside the temple to absolve him of the sins that he had committed during the war by killing a Brahma.

Thus, he asked Hanuman to get linga from the Himalayas. When Hanuman took too long to return with the Linga, Sita, the wife of Rama built a linga out of the sand and installed the same inside the temple.

This lingam resides as the prime deity in the temple and is called Ramalingam. Later, Hanuman brought the lingam with him and the same was installed along with Sita’s lingam. This lingam is named as the Viswalingam.

Rameshwaram Architecture and Inside the Temple

The temple is known to be built by the Pandya dynasty using the Dravidian style of architecture. The striking attraction of the temple is that it has the longest corridor and high walls.

In total there are three corridors that are 3,850 feet long. While going around the temple one can see, the outer corridor has about 1,212 pillars are 30 feet in height.

The temple has 22 tirtas or wells that are bathing of the devotees and are the main highlights of the temple. It is known that by bathing in these well, all sins are washed.

The temple because of its religious significance and attainment of salvation is open throughout the year. But, as the Rameshwaram temple is located in Tamil Nadu that is characterised by tropic coastal weather, visiting the temple during summers is not recommended.

The temperature becomes hot and humid and rains are particularly common in June and July. Therefore, visiting in cooler months such as November till March is much better.

The Chardham yatra locations or places of moksha are of immense importance for the Hindu devotees besides having significance as tourist destinations.

But with increasing footfalls, there have been instances of degradation of the architecture which is resurrected from time to time.

Further, as these temples are centuries old, preserving them and following the decade-old rituals keep the Hindus close to their culture and ritual.

Besides, the magnificence of these huge temples, the marvels that are associated with them especially the Jagannath Puri temple is a tale to witness.

It is said that no bird or aircraft flies above the Rameshwaram temple and winds breeze in the opposite direction that is true and can be seen by tourists themselves.

The Chardham Yatra must be in the to-do list as they are not just a sight to behold but will be a living memory with you all your life.